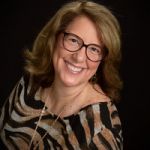 Joan Wade, Ed.D. is a life-long educator with over 30 years of service in public education.  She began serving as the Executive Director for the Association of Educational Service Agencies (AESA), on July 1, 2016.

Dr. Wade began her career as a library media specialist in Montello, Wisconsin. After attending graduate school, she served in various administrative capacities in Wisconsin school districts including as Technology Coordinator for Portage Community School District, and Distance Learning Director for CESA 5.

In 1998, Dr. Wade was elected to the Wisconsin State Assembly served as a State Representative in the Wisconsin State Legislature from 1998 – 2001. She served on the Education, Agriculture and Ways and Means Committees as well as chair of the state’s Tourism committee.

Dr. Wade has served as CEO for CESA 6 for 15 years. During her tenure, she led CESA 6 through a visioning and systems design process that resulted in several major initiatives. Among her accomplishments was an in-depth study of the Next Generation of Schools, leading to several new services for CESA 6, including an annual symposium of the best practices in next generation thinking. As a champion of education, Dr. Wade and CESA 6 would host monthly legislative forums for district administrators, board of education members and regional legislators to discuss educational policies and issues.

Dr. Wade is a graduate of UW-Whitewater, received her Masters Degree from UW-Madison and her Doctorate degree from Edgewood College also in Madison, Wisconsin.

She has always been an advocate for the value of regional educational service agencies. She seeks to provide forums for courageous leaders to network and inspires bold solutions to current and future complex challenges facing education.  Dr. Wade strives to bring together diverse voices in order to yield effective regional and national networks that produce results for the common good.